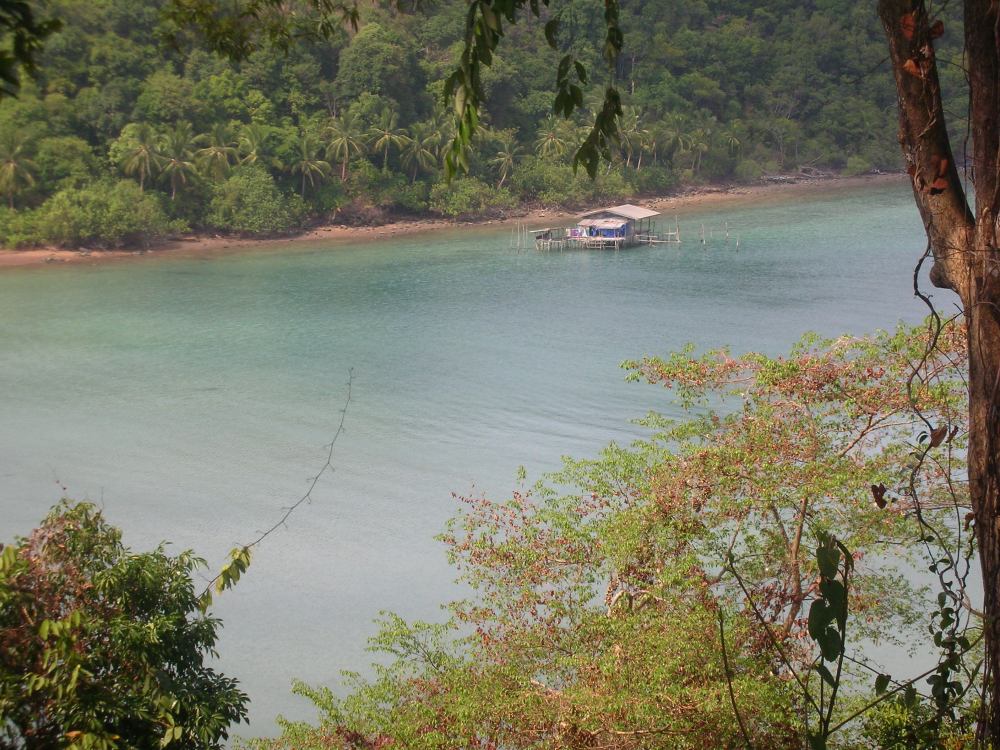 An unusually grey dawn smothered Thailand’s Ko Chang as we wiped the sleep from our eyes. In a fit of enthusiastic pique we had volunteered our services for the day’s fishing expedition and now found ourselves aboard a small red boat alongside the captain and his two sons. Open water beckoned.

Our hunting ground was the strait between Ko Chang and distant, hazy Trat. As we motored along we noticed low flying cloud had enveloped the island’s forest peaks and heavy rain was heading towards us. The captain noticed our concerns. ‘It’s always dark this time of day,’ he soothed, ‘mai bpen rai.’ With that he furnished us with our tools: Nescafe cans circled with twine.

Buoyed by our new toys we set about decimating the local fish population with utter relish. Each fling of our twine brought renewed levels of let-us-at-them intensity as we pictured the growing piles of grouper, tuna and snapper capsizing the boat due to sheer volume.

Although we hadn’t yet mastered the art of leaning over the sides and not falling in we felt we might be naturals at this game. Like true pros we attacked the sea again and again.

The clouds provided a thin illuminated veneer that protected us from the sun and the sea had developed a halcyon gloss that was as welcoming as it was shimmering. A school of dolphins cutting a swath in the middle-distance added fire to our nautical fervour.

Roundly cursing an escaping shoal, a commotion behind us grabbed our attention and put us firmly in our place. The captain’s two sons were wrestling with a barracuda the size of a good-sized dog and after a minor struggle they landed it before nonchalantly continuing as before.

It was here the fishing hierarchy was cemented. These experienced youngsters, their whole lives devoted to the ocean, were using empty gallon-sized bottles of washing-up liquid to catch their prey. Our Nescafe cans simply couldn’t compete.

Suitably chastened with a growing sense of rod envy, I peered at our handful of fluorescent butterfly fish and caught the stoic captain’s eye. He smiled a toothy, sympathetic grin that told us everything we needed to know: the spirit was willing but the flesh was weak. As if to compound our position my companion was intimidated by a seagull and fell into the sea.

However, the two young fishermen were excellent teachers and before long we had caught a respectable pile of fish that served to make an excellent barbecue. On a deserted beach at the island’s northern tip cold bottles of Chang clinked as we toasted the fishermen for allowing us to spend the day with them learning their trade.

Later, dining on Barracuda curry, we waxed lyrical about our trip. It appeared as though we had discovered an entirely new breed of fish, one that grew in size and quantity every time someone asked a question about it. We dined on it for a long time afterwards.