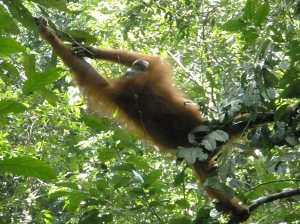 We were in the jungles of Bukit Lawang, northern Sumatra, when an approaching rustle suggested something big was coming our way. Despite the excitement of our search for orangutans, the drowsiness was kicking in, thanks to the combination of a tropical climate and lingering jetlag. We jolted back to life, however, when an excited whisper came up and rudimentary sign language told us to take cover.

The adventure had begun a few days previously on the bus from Medan. A fellow passenger had told me how easy it was to see the so-called ‘men of the forest’ and sure enough, as I drifted in and out of consciousness, the idea of a jungle adventure gestated in my brain.

My new friend wasn’t wrong. As soon as I’d holed up in a guesthouse, the tour guides descended, each offering a unique spin on the hunt for apekind.

They tried to entice me with promises far too filthy to repeat, but they needn’t have bothered. They had me at orangutan.

Come the next morning, and an unsurprising lack of lurid incidents, I found myself cursing a lack of sturdy footwear, my skate shoes no match for the rough and tumble of the dense rain forest. The overnight trek was looking trickier by the moment.

Thankfully, my companions failed to notice as we succumbed to the muggy conditions, bottles of water gleefully chugged down gulps at a time.

That night at camp, as rounds of ‘jungle whiskey’ – aka hot, sweet tea – soothed our souls and singalongs eased our spirits, the guides gave us a few pointers about how to behave around the notoriously solitary orangutans.

It was simple enough– keep our distance, make no sudden movements, don’t feed the animals.

As a critically endangered species the authorities understandably wanted to protect the beasts, be it maintaining their natural environment or stopping them becoming overly reliant on handouts.

Come the next morning, after a fitful night’s sleep, we set off in earnest, the thought of what might transpire adding a spring to our step.

We didn’t have to wait long.

The rustling grew louder and suddenly it appeared in the clearing, a magnificent specimen covered in reddish-brown fur surrounding a jet black face. It padded along, seemingly without a care in the world.

In fact, it seemed so peaceful that to imagine it harbouring any violent tendencies whatsoever seemed totally alien.

As if reading my thoughts, Ricoh the guide turned to me.

“He could rip your arm off if you get too close,” he joked, chuckling as I took an involuntary step backwards.

We stepped back to observe this gentle giant as it effortlessly climbed a tree and fixed its eyes on us, a graceful intelligence working underneath the surface.

It sat for a while before departing, leaving us dumbstruck with respectful awe.

Later, nursing a Bintang, the encounter flashed through my mind. To see an animal so at ease in its surroundings was profoundly moving and as I listened to the jungle’s myriad sounds I was in no doubt as to who the lords of Bukit Lawang really were.

One thought on “Men of the Jungle: An Encounter with Orangutans in Bukit Lawang”