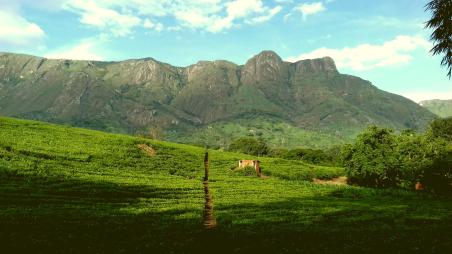 Brooding and silent, Mt Mulanje stands as southern Malawi’s most stirring sight. Seemingly rising out of the surrounding tea plantations, it commands the respect of all who see it. Indeed, watching it hove into view on the road from Blantyre represents something of an epiphany. To see such a grand peak dwarfing its surroundings, emanating equal parts serenity and intensity, is to witness firsthand the full force of nature.

Its size belies its heft. While Tanzania’s Mt Kilimanjaro mops up most visitors to the region – understandable given its setting, size, challenge and, if apocryphal tales are anything to go by, setting of God’s footsteps – here is a mountain with challenges all of its own.

With a maximum elevation of 3,002m, Mt Mulanje is no slouch. The climb represents a great physical challenge, not so much for its elevation than its seemingly unending slopes. On the way, it is possible to see families collecting wood from the dense forests while all around unending views of the surrounding basin stretch across the vast, flat savannah. Reach the top, and many different paths reveal themselves; take the wrong one, or underestimate the sheer size of Mt Mulanje, and there’s every chance the intrepid explorer will never return.